Howard College Campus will be opening the new and expanded state of the art Research Commons shortly. This facility is now situated on the 1st floor of E.G. Malherbe Library.

It is one of a kind in the history of UKZN Libraries. It is furnished with: 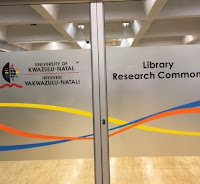 Who is eligible to access this vast study area and reading material? Registered UKZN Masters and PhD students.
And there’s more! Half of the 1st floor has been turned into a Research Hub with individual study cubicles.
The facility is access controlled.
What else?
Coffee area

Are these group study rooms available 24/7? These rooms are only available from 8:00- 4: 00pm. They can be booked at the issue desk on the Ground floor of the Library.
For more information on the New Research Commons contact your Subject Librarian: contact details:
Ms Nonjabulo Ngcobo…Ngcobon16@ukzn.ac.za
Ms Claudette Kercival…Kercival@ukzn.ac.za
Ms Nontobeko Sikhosana…Sikhosana@ukzn.ac.za
Ms Faith Magwaza…Magwazan1@ukzn.ac.za

When is the official opening? Watch the Space!!!

WE HAVE BRAND SPANKING NEW TOILETS

Renovations to UKZN libraries have been sporadic. We at the Life Sciences Library were fortunate enough to have our toilets renovated recently – an upgrade that was badly needed. The staff were excited to hear that work was finally going to begin at the end of July this year. Campus Management Services (CMS), and not the library undertook this project. Walls were broken down and old pipes were removed.  We just had to cope with a bit of drilling and dust for a while, and having to traipse down two floors for a toilet break. New pipes and toilets systems were installed, and polished porcelain wall and floor tiles were fitted. The walls and doors were given a new lick of paint. We also have a full-length mirror to boot!


We are thrilled with the modern look and colour. Have a look at the photos of the ladies toilets below.

Posted by UKZN Library at 11:20 No comments: