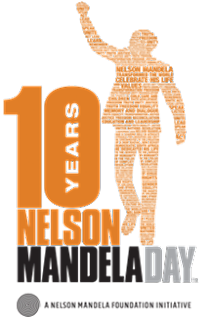 Nelson Mandela is a symbol of liberation and freedom, not only in South Africa, but globally as well. One of his famous quotes regarding freedom is “To be free is not merely to cast off one’s chains, but to live in a way that respects and enhances the freedom of others.”[1] His fight for freedom was not just for freedom from oppression but encompassed equal education as well, and he maintained that “Education is the most powerful weapon which you can use to change the world”.[2] With this in mind, the Pietermaritzburg (PMB) UKZN libraries held a competition on Nelson Mandela Day. The questions covered various aspects of Nelson Mandela’s life which all South Africans should be aware of to appreciate the sacrifices he had made for our freedom. Students were encouraged to appreciate the opportunities which they have. A display was put up with the prizes in a display case to market the event. There were 4 book prizes which were sponsored by various publishers.
The competition was run for the day and the draw was held at 2:30pm in the PMB Main Library foyer.

1st prize was sponsored by Adams Booksellers and Stationers, “Man of the people: a photographic 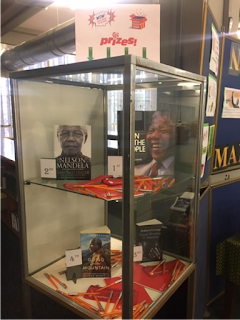 tribute to Nelson Mandela by Peter Magubane”, and the winner was Kwanele Khathi.

2nd prize was sponsored by an anonymous donor, “Dare not linger: the presidential years by Nelson Mandela and Mandla Langa”, and the winner was Humaira Amod.

4th prize was sponsored by Van Schaik Bookstore, “Going to the mountain: life lessons from my grandfather, Nelson Mandela by Ndaba Mandela”, and the winner was Thabani Nkosi.

All the winners were informed via the email.

The last question in the competition asked “What does Nelson Mandela Day mean to you?” The responses to this question were phenomenal and inspiring. The entrants clearly embraced the example that Nelson Mandela aspired to be. Maybe they will inspire you as well:

“We are one nation, under one umbrella and moving forward as a rainbow nation”. Sphiwe Mzobe

“It’s a day to celebrate our freedom that Nelson Mandela had fought for and it is a day to give back to those less fortunate in and honour and remembrance of Tata Madiba”. Humaira Amod

“It’s the day whereby one can stand 67 minutes to do something good or help others on this day. This is the day to respect and honour the father of South Africa, Nelson Mandela”. Thabani Emmanel Nkosi
“Nelson Mandela is a hero and a man of the people. Mandela fought for the country and brought about the drastic change and the end of the apartheid regime. Mandela has brought peace, equality and amongst all love between races in our country, so to me, Nelson Mandela is a hero and fatherly figure. South African is a rainbow nation only because of him. He is a role model and a hero to me”. Thaiyeerah Sheik

“First I am celebrating Nelson Mandela’s birthday, and it means that you are able to do anything since Mandela spent 27 years in prison but was able to survive and that means to me every battle you are able to win every battle as long as you believe in yourself”. Kwanele Khathi

“Giving. He gave and dedicated all his time to South Africans, meaning I must also give back to the community that raised me to what I am today”. Siphiwe Tembe

“It means we are united and we must help one another”. Nhlakanipho Mdletshe

“This means that I must do good things for other people as he did to black people. Also to learn to forgive other people and be patient”. Mnqobi Nzama

“It is a great remembrance of the great leader who fought for freedom for the Republic of South Africa at large. Mandela sacrificed a lot for South Africa’s citizens and he led with dignity and advocating peace more than anything”. Sabelo Ngema

“It means doing great for other people and reshaping the environment you occupy to what you desire it to be”. Lindokule Cebekhulu

“It means I as an individual should make it my responsibility to give back to the society where I can since Nelson Mandela gave his precious time to serve 27 years in prison so that you and I can live in a democratic society”. S’bongakonko Mpunguse

“Selfless. Used his all to transform the world. Unifier. Charity. Nation builder. Resilience. Will power. Humble. He is immortal, will live forever for what he stood for, sacrificed and was willing to die for will benefit generations and generations”. Philisiwe Khanyile

“It means sustainable freedom of all nations and all races and all ages. It also means that success and what I understand as freedom comes through hard work, determination and ‘passion’”. Lindiwe Princess Maseko

“It is a day that we celebrate his good acts by showing the spirit of Ubuntu. Giving 67 minutes of one’s time to do good for someone or the environment. It does not have to be a big act”. Nonsi Shandu

“It’s a day of remembrance of how far we’ve come as a country and how special our country is. It’s a day of reflection that if we are more selfless, kind and helpful we’d do soo much”. Awonde Buthelezi

“A day to forgive people and help other people in need. To give back with a grateful heart. Nelson Mandela day also means that there is still hope for our South African country to do so much more”. Malwande Bhengu

“For me, it is a day to make an impact to transform the world, to help those in need”. Sinovuyo Sithole

“It is the day I get to celebrate the birth of an International Icon and, personally, my mentor who managed to make South Africa a democratic country. His determination and confidence still inspires millions, including myself”. Diyaksha Naiker

“It is a day to honour a man who managed to help an entire country gain its independence. It’s also to honour the person who gave us all equal rights and opportunities, which allow most of us to be studying at the university, like myself”. Kelansha Naidoo

“Nelson Mandela Day means celebrating the fact that we all have the power to transform the world the way in which Mandela did. It also means remembering his legacy and praising him for it. For me, it’s also about doing things that help one another”. Zama Nhlabathi

“It’s a constant reminder of the selfless sacrifice for hi country and people, and also reminds the people of South Africa what it took for the nation to be where it is today. His love for his people and also bringing about a democratic state which is founded on equality, freedom and that does not discriminate on any on the grounds such as race, gender or any of the prohibited grounds”. Andile Dlomo

“Mandela day is about giving back to the community and appreciating what Mandela has been through to make our lives, in this beautiful country, better”. Shanice Reewith

“It means remembering what Nelson Mandela fought for, that is, human rights, equality and freedom. It means fighting for human rights for all humans, freedom and equality. It means creating a society free of discrimination”. Evans J Machengete

The display which was put up for the month of July and Nelson Mandela Day
Nelson Mandela said that [3]“A winner is a dreamer who never gives up”. Let his legacy inspire us to try our best in all that we do, to appreciate every opportunity that we receive and to never give up on our dreams. We are all winners. Let us go for gold!

Posted by UKZN Library at 16:04 No comments: