How do you teach?

You have planned your library instruction session and laid out your objectives. Now comes the hardest part: teaching. During the course of your session do you constantly question whether you are engaging with the students or connecting with them? As our sessions are mainly hands-on, are our students taking in what we are teaching them?  Unfortunately, as librarians, we do not receive formal training on how to teach. This is acquired through experience. So how do you develop good teaching practices?


The University of Texas at Austin (2016) suggests the following pointers:


1.     Laying out your objectives. Explain to the students what your goals for the session are going to be, and whether they will involve any practical activity.  Writing them on the board or including them in a hand-out can reinforce the focus of the session.
2.     Projection. Make sure you are speaking loud enough so that everyone can hear you.
3.     Pace. Make sure your session is neither fast-paced, nor too slow.
4.     Avoid library-speak! Use terminology that students are familiar with.
5.     Maintain eye contact. Do not focus only on one person or one section of the room.
6.     Use gestures to emphasise a point. If you want to emphasize something, gesture toward the projector screen instead of moving the mouse on your station screen.
7.     Walk around to keep your audience's attention. Move around the room, but avoid pacing.
8.     Smile and laugh! It makes you more approachable.

1.     Match your instruction to the content you are teaching. Some concepts are best taught through hands-on work, some are best imparted through lectures, and others are best communicated through group discussions.
2.     Bring your own learning style into balance. Your preferred teaching and communication methods may be influenced by your own learning preference or experience. For example, if you prefer visual rather than verbal learning, you may tend to provide a visual learning experience for your students. Take into account your preferences as well as the range of preferences of your students.
3.     Use digital media to enhance your topic. Students have different learning styles. Using videos to engage visual learners or offering podcasts to auditory learners helps students to remember the content better.
4.     Aim for the long term, not the short term. Develop skills in students that will last them a lifetime.
How do you connect with students? How do you structure your library instruction sessions? What are your methods of teaching databases or EndNote? Which media do you use? Please share your thoughts.

Those who believe that working in a library is terribly boring are sadly mistaken. We have many exciting and even dangerous moments. Case in point: the recent student protests on the UKZN Pietermaritzburg (PMB) campus.

Students began protesting from around the 11 August 2016. Every day (and night) seemed to bring something new with people being assaulted with knives, vehicles being damaged and set alight, burning of stuff across campus and its surrounding areas. The air was filled with the noise of sirens piercing the air and the sound of students singing their protest songs. Something new unfolded every day. The uncertainty was unsettling, so unlike a library environment.

On Wednesday 17th August 2016 students were yet again protesting outside on the lawns close to the library. As per usual our doors and gates remained opened until such time as the Risk Management Services section or Library management gave the command to close the library doors and lock the library gates. All library users are asked to evacuate the building “for their own safety”.  Around 10:30am students apparently tried to disrupt lectures at one of the lecture venues. We were told that some students were then arrested by the POP (Public Order Policing). Watching from the windows, staff could see that this angered the students who retaliated by throwing objects at POP. The crowd was quite large and angry, militant and frustrated.

Then, a loud bang, and a sudden bright flash of light (stun grenades). Staff watching this were like a Nyala caught in the headlights. We were just stunned. Stuck in the moment. Unable to move or utter a word. One staff member was reported to have had heart palpitations. We were all just so shocked, everything happened so fast.  The protesting students dispersed so fast it was unreal. As they run this way and that way, library staff were heard to say, “I hope the students don’t go and damage our motor vehicles in anger”.

Come Tuesday 4 October and the protests have not abated. Confused, stressed and traumatised PMB staff attended a meeting organised by the various staff unions with the person in charge of the PMB campus, Prof Jaganyi. Some students were allowed to address the meeting. One of the statements the students made was that they could no longer guarantee the safety of staff as the protesting students were frustrated and seemingly uncontrollable.

Library staff returned to the library, having just settled down we heard three or four loud bangs. Chaos erupted in the building. Petrified students came screaming down the stairs from all floors trying to get out the building as quickly as possible. Mayhem reigned. Staff were terrified. Evacuation procedures flew out the window. Had the threat of violence made just a few minutes ago now been implemented? Firecrackers had been set off in the building. The building was evacuated and the bomb squad was called to investigate. Hours later the building was declared safe. Traumatised staff and students returned to the Library.

As a library staff member I feel like a sitting duck. Like the abandoned baby Nyala that has lost its mother, vulnerable and easy prey, just waiting for something bad to happen. In this volatile situation it is so unnerving. You have no guarantee of safety or the safety of your property, especially your motor vehicle. The stress and trauma we experience is unbelievable. One of my colleagues had nightmares after witnessing the harsh realities of safety and security personnel taking action on campus to restore law and order. Staff were literally shaking after these experiences. This situation is also aggravating existing medical conditions, and leading to new medical complications. In all this, staff are expected to work as normal in an abnormal situation. We are advised that we may take our leave if we feel unsafe. I need our normal order and continuity, and cannot wait for our quiet and peaceful days to return. 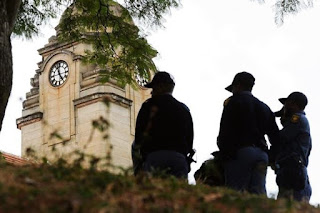 Members of the SAP keep an eye out for any protests under the clock tower of Old Main Building at UKZN on Monday. (Ian Carbutt)